almost three (3) years ago I wrote an article about the Tools I use daily. But for the last 18 months (or so), I am partial using windows 10 due to my new job role, thus I would like to write an updated version on that article.

I’ ll try to use the same structure for comparison as the previous article, keep in mind this a nine to five setup (work related). So here it goes. 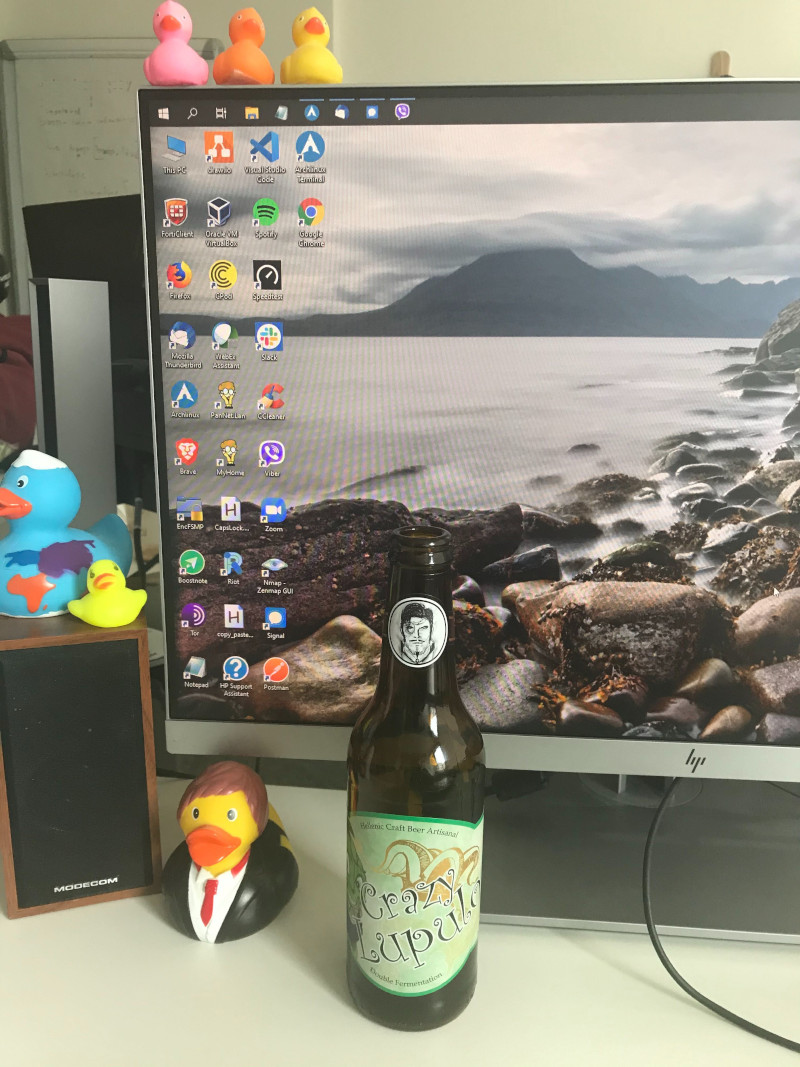 NOTICE beer is just for decor ;)

I use Win10 as my primary operating system in my worklaptop. I have a couple of impediments that can not work on a linux distribution but I am not going to bother you with them (it’s webex and some internal internet-explorer only sites).

We used to use webex as our primary communication tool. We are sharing our screen and have our video camera on, so that everybody can see each other.Working with remote teams, it’s kind of nice to see the faces of your coworkers. A lot of meetings are integrated with the company’s outlook. I use OWA (webmail) as an alternative but in fact it is still difficult to use both of them with a linux desktop.

We successful switched to slack for text communications, video calls and screen sharing. This choice gave us a boost in productivity as we are now daily using slack calls to align with each other. Although still webex is in the mix. Company is now using a newer webex version that works even better with browser support so that is a plus. It’s not always easy to get everybody with a webex license but as long as we are using slack it is okay. Only problem with slack in linux is when working with multiple monitors, you can not choose which monitor to share.

I have considered to use a VM (virtual machine) but a win10 vm needs more than 4G of RAM and a couple of CPUs just to boot up. In that case, it means that I have to reduce my work laptop resources for half the day, every day. So for the time being I am staying with Win10 as the primary operating system. I have to use the winVM for some other internal works but it is limited time.

I daily use these OpenSource Tools:

and from time to time, I also use:

except plumb, everything else is opensource!

So I am trying to have the same user desktop experience as in my Linux desktop, like my language swith is capslock (authotkey), I dont even think about it.

Default Win10 filesystem with bitlocker. Every HW change will lock the entire system. In the past this happened twice with a windows firmware device upgrade. Twice!

Dropbox as a cloud sync software, with EncFSMP partition and syncthing for secure personal syncing files.

(same setup as linux, except bitlocker is luks)

Windows Subsystem for Linux aka WSL … waiting for the official WSLv2 ! This is a huge HUGE upgrade for windows. I have setup an Arch Linux WSL environment to continue work on a linux environment, I mean bash. I use my WSL archlinux as a jumphost to my VMs.

Using Visual Studio Code for scripting. vim within WSL and notepad for temporary text notes. I have switched to Boostnote for markdown and as my primary note editor.

I use mostly Slack and Signal Desktop. We are using webex but I prefer Zoom. Riot/Matrix for decentralized groups and IRC bridge. To be honest, I also use Viber & messanger (only through webbrowser).

(same setup as linux - minus the Viber client)

VLC for windows, what else ? Also GIMP for image editing. I have switched to Spotify for music and draw io for diagrams. Last, I use CPod for podcasts. Netflix (sometimes).

I have switched to a majority of electron applications. I use the same applications on my Linux boxes. Encrypted notes on boostnote, synced over syncthing. Same browsers, same bash/shell, the only thing I dont have on my linux boxes are webex and outlook. Consider everything else, I think it is a decent setup across every distro.