Jun
13
2017
Failures will occur, even with ansible and version control systems!
Posted by ebal at 19:57:17 in blog, planet_ellak, planet_Sysadmin, planet_fsfe

Every SysAdmin, DevOp, SRE, Computer Engineer or even Developer knows that failures WILL occur. So you need to plan with that constant in mind. Failure causes can be present in hardware, power, operating system, networking, memory or even bugs in software. We often call them system failures but it is possible that a Human can be also the cause of such failure!

Listening to the stories on the latest episode of stack overflow podcast felt compelled to share my own oh-shit moment in recent history.

I am writing this article so others can learn from this story, as I did in the process.

I am a really big fun of rolling upgrades.

I am used to work with server farms. In a nutshell that means a lot of servers connected to their own switch behind routers/load balancers. This architecture gives me a great opportunity when it is time to perform operations, like scheduling service updates in working hours.

The procedure is really easy: 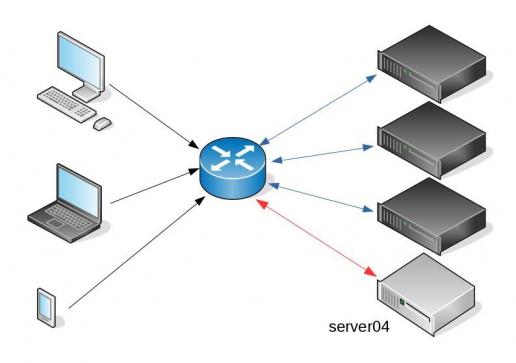 This procedure is well established in such environments, and gives us the benefit of working with the whole team in working hours without the need of scheduling a maintenance window in the middle of the night, when low customer traffic is reaching us. During the day, if something is not going as planned, we can also reach other departments and work with them, figuring out what is happening.

We are using ansible as the main configuration management tool. Every file, playbook, role, task of ansible is under a version control system, so that we can review changes before applying them to production. Viewing diffs from a modern web tool can be a lifesaver in these days.

We also use docker images or virtual images as development machines, so that we can perform any new configuration, update/upgrade on those machines and test it there.

To perform service updates with ansible on servers, we are using the ansible inventory to host some metadata (aka variables) for every machine in a serverfarm. Let me give you an example:

And performing the update action via ansible limits

When something is not going as planned, we revert the changes on ansible (version control) and re-push the previous changes on a system. Remember the system is not getting any traffic from the front-end routers.

I was ready to do the update. Nagios was opened, logs were tailed -f

I run the ansible-playbook without limiting the server I wanted to run the update !!!

So all new changes passed through all servers, at once!

On top of that, new configuration broke running software with previous version. When the restart notify of service occurred every server simple stopped!!!

Funny thing, the updated machine server04 worked perfectly, but no traffic was reaching through the load balancers to this server.

It was time to run the rollback procedure.

Reverting changes from version control is easy. Took me like a moment or something.
Running again:

In 2,5 minutes I had fixed the error and I was waiting for nagios to be green again.

Then … Nothing! Red alerts everywhere!

It was time for me to inform everyone what I have done.
Explaining to my colleagues and manager the mistake and trying to figuring out what went wrong with the rollback procedure.

On this crucial moment everything else worked like clockwise.

My colleagues took every action to:

and leaving me in piece with calm to figure out what went wrong.

I felt so proud to be part of the team at that specific moment.

If any of you reading this article: Truly thank all guys and gals .

I bypass ansible and copied the correct configuration to all servers via ssh.
My colleagues were telling me the good news and I was going through one by one of ~xx servers.
In 20minutes everything was back in normal.
And finally nagios was green again.

It was time for post-mortem and of course drafting the company’s incident report.

We already knew what happened and how, but nevertheless we need to write everything down and try to keep a good timeline of all steps.
This is not only for reporting but also for us. We need to figure out what happened exactly, do we need more monitoring tools?
Can we place any failsafes in our procedures? Also why the rollback procedure didnt work.

I am writing this paragraph first, but to be honest with you, it took me some time getting to the bottom of this!

Rollback procedure actually is working as planned. I did a mistake with the version control system.

What we have done is to wrap ansible under another script so that we can select the version control revision number at runtime.
This is actually pretty neat, cause it gives us the ability to run ansible with previous versions of our configuration, without reverting in master branch.

The ansible wrapper asks for revision and by default we run it with [tip].

So the correct way to do rollbacks is:

At the time of problem, I didnt do that. I thought it was better to revert all changes and re-run ansible.
But ansible was running into default mode with tip revision !!

Although I manage pretty well on panic mode, that day my brain was frozen!

I wrap my head around and tried to find a better solution on performing service updates. I needed to change something that can run without the need of limit in ansible.

The answer has obvious in less than five minutes later:

I need to keep a separated configuration folder and run my ansible playbooks with variable instead of absolute paths.

That will suffice next time (and actually did!). When the service upgrade is finished, We can simple remove the previous configuration folder without changing anything else in ansible.

Another (more simplistic) approach is to create a new group in ansible inventory.
Like you do with your staging Vs production environment.

and create a new yml file

run the ansible-playbook against the new serverfarm001_new group .

A lot of services nowadays have syntax check commands for their configuration.

You can use this validation process in ansible!

here is an example from ansible docs:

Everyone makes mistakes. I know, I have some oh-shit moments in my career for sure. Try to learn from these failures and educate others. Keep notes and write everything down in a wiki or in whatever documentation tool you are using internally. Always keep your calm. Do not hide any errors from your team or your manager. Be the first person that informs everyone. If the working environment doesnt make you feel safe, making mistakes, perhaps you should think changing scenery. You will make a mistake, failures will occur. It is a well known fact and you have to be ready when the time is up. Do a blameless post-mortem. The only way a team can be better is via responsibility, not blame. You need to perform disaster-recovery scenarios from time to time and test your backup. And always -ALWAYS- use a proper configuration management tool for all changes on your infrastructure.

After writing this draft, I had a talk with some friends regarding the cloud industry and how this experience can be applied into such environment. The quick answer is you SHOULD NOT.

Working with cloud, means you are mostly using virtualization. Docker images or even Virtual Machines should be ephemeral. When it’s time to perform upgrades (system patching or software upgrades) you should be creating new virtual machines that will replace the old ones. There is no need to do it in any other way. You can rolling replacing the virtual machines (or docker images) without the need of stopping the service in a machine, do the upgrade, testing, put it back. Those ephemeral machines should not have any data or logs in the first place. Cloud means that you can (auto) scale as needed it without thinking where the data are.